The Russian company MattPear produces stainless steel hookahs, which are successful even on the world stage. One of the distinctive features of the manufacturer is the possibility to assemble the device like a construction set. Parts of the hookah are interchangeable and can be purchased according to the needs of smokers. Each model has a number of complete sets, for example, depending on whether the user needs a molasses collector and a threaded flask or not.

In 2017, the creators of the MattPear hookah patented the world's first magnetic connection method. MattPear Porc Connection was a groundbreaking new type of port connection at the base of the hookah, revolutionizing global manufacturing and changing the direction of the entire industry.

At the moment the company is one of the biggest players in the hookah accessories market, having stable reputation and big fan base. 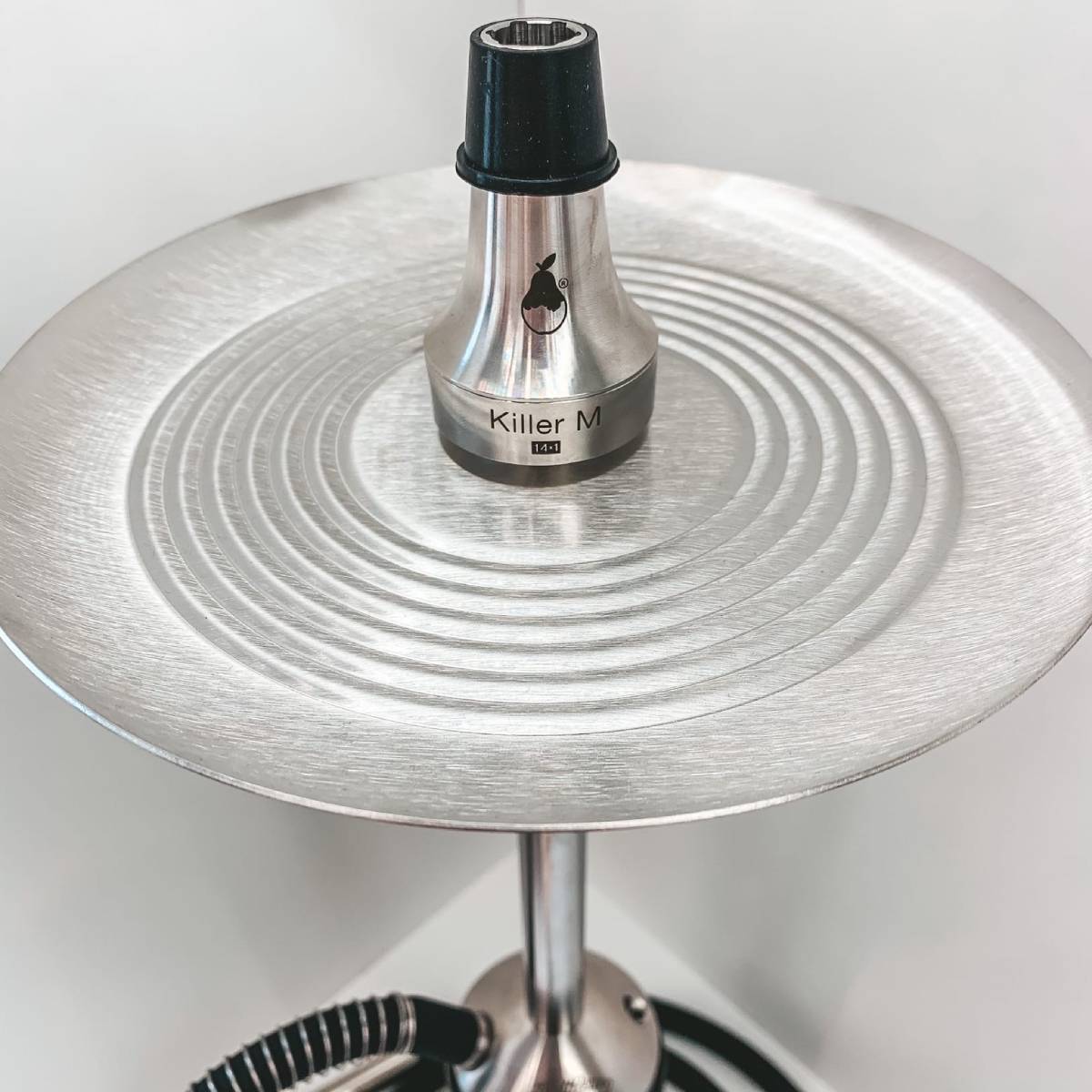 This is the very first and, in its own way, the fundamental model of hookah Dubai from the company MattPear. MattPear Classic hookah became very popular five years ago both on the Russian market and internationally. All parts of the model are made of medical stainless steel with a lifetime warranty.

The basic set of the device includes a shaft, a saucer, a connector under the saucer, a purge valve and one of the diffusers. There is an option to add other MattPear accessories in the form of a silicone hose, mouthpiece and flask.

The kit comes with a choice of two types of diffusers. The first, of standard design, with lots of holes around the perimeter and a hole in the base. With it you can blow the waterpipe with just one draft. The second one is a weighting draught and creates the effect of a standard hookah smoking.

The upper and the lower part of the shaft are screwed in with the thread in the base without any effort. The bowl is put on top and a silicone seal is installed under the bowl, coming in the kit. In the same way the silicone seal from the manufacturer is put on the bottom. The purge valve can be tightened or at all take out, lying inside the ball.

Even over a long time of use by users have not been identified critical flaws in the model or traces of corrosion. The only problem can be considered a kink in the hose at the attachment point to the base, which makes it useless over time and leads to its replacement. But this problem is found absolutely in all hookahs and solved by installing a spring in the attachment point of the hose.

Shaft design is made in classic minimalist style for the company and is a straight stick, tapering slightly in the middle at both ends. On the base there is an engraving with the company logo in the form of a pear, as well as the model name and serial number. For a modest surcharge, any user has the opportunity to put their individual logo on the base of the hookah. 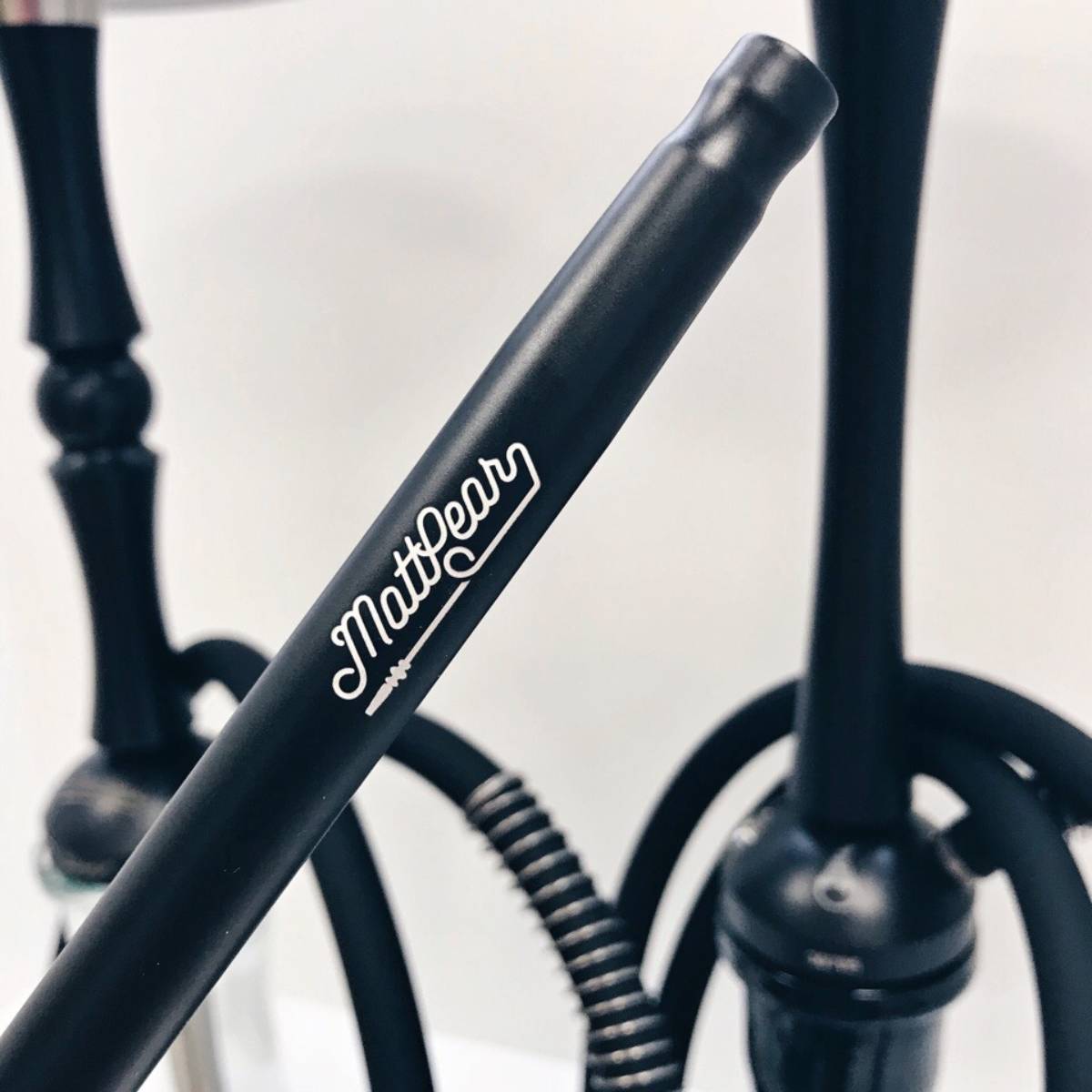 In 2016, this model won the JohnCalliano Awards in the category "Best Hookah of the Year". The MattPear Simple M was a reincarnation of the Simple model, released with a redesign of the shaft and updated connectors. In the entire lineup, this solution is more of a budget representative of the family that many fans of the pear brand have been waiting for.

You get a high-grade stainless steel internal construction, coated on the outside with a layer of polyacetal overlays. The submersible part is made entirely of stainless steel, as well as other contact components. In addition to the shaft comes with a saucer, a removable diffuser, a dural mouthpiece, a silicone soft-touch hose with a spring, magnetic connectors at the base of the hookah for the purge valve and the location of attachment of the hose.

It is possible to buy the model without flask or diffuser. Thus, the most budget set MattPear Simple M will cost even cheaper.

The model has two design variations. The first one is similar to the Classic model and is a straight stick. The second one has a ball in the middle, with streamlined shapes above and below. Also, the manufacturer provides the ability to brand the purchased models of hookah.

For the most part, users have had no complaints about the imperfection of design details. However, a small percentage report rusting and demagnetization of the bindings over time in the older version. To replace it, you need to contact the Krasnodar manufacturer directly, who will have no problem replacing the necessary components at their own expense.

In MattPear Simple M model the magnetic mount can be easily unscrewed by yourself with a simple coin to replace the magnet in its base if demagnetization occurs. A spare magnet is included in the package for this purpose. Also questionable is the use of polyacetal as a cover. This undoubtedly adds points to the design of the model, which is made in black and white. However, over time, the overlays may rot or slightly melt from the close cup, which will create an unpleasant smell from the device. But even if suddenly this is not enough for you - the manufacturer gives a 5-year warranty. 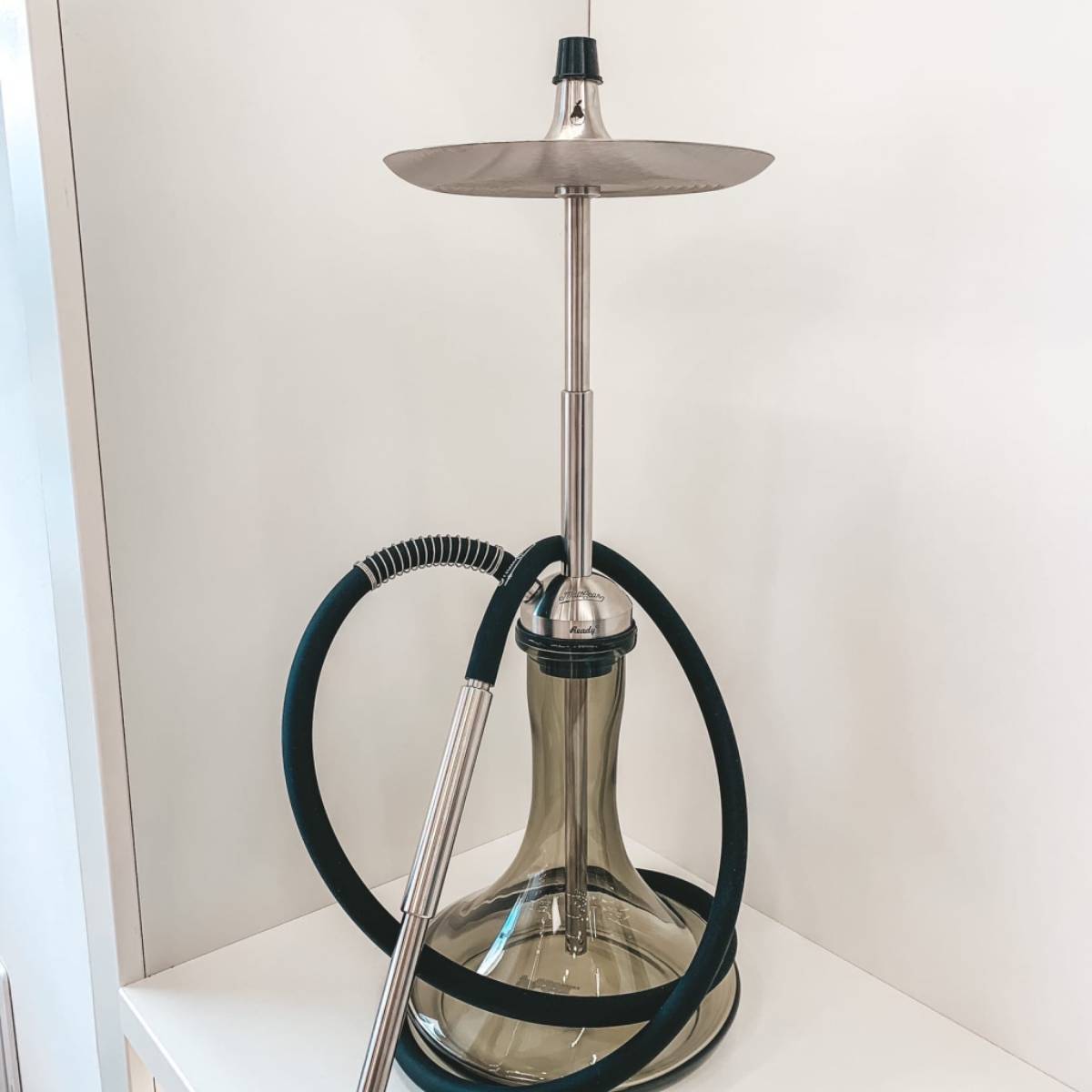 One of the most popular hookahs on the market. Having appeared on store shelves in 2020 as a prototype, this model came out later than everyone else and is still in demand and relevant. The MattPear Ready S hookah is a re-release of an established classic. It comes in 18 different configurations, depending on the needs of the user. As standard, you get a set of:

The whole kit comes in a stylish compact case for MattPear hookahs. Cheaper you can take only the stainless steel shaft and flask, which will already function as a hookah stick.

Due to the unique shape of the bulb and the non-twisting diffuser, the MatPir hookah is very easy to smoke and virtually silent. The flask has three risks, corresponding to the different modes of smoking. The one corresponding to the lowest water level is for the lightest draw. The second risk is designed for intermediate variant between light and standard draft. And the highest risk corresponds to the standard draft.

Users are divided on this point. Some believe that the fixed diffuser is a step backwards. Others believe that pouring water into the flask to increase the gravity of the draft is much more convenient than disassembling the hookah and removing the diffuser.

This model, unlike its predecessors, has an internal blow valve. This solution frees users from unnecessary parts and half the problem with the possible failure of magnetic connectors - in this implementation they are simply not needed. Compared with the Simple model the design is made in a minimalist style without polyacetal inserts with the possibility of adding accessories to your taste.

The products come in stylish boxes where each piece is packed individually. Because of this, when you unpack it feels like you're getting a new phone. MattPear also comes with branded stickers, a business card with the necessary contacts, and a certificate with a serial number. 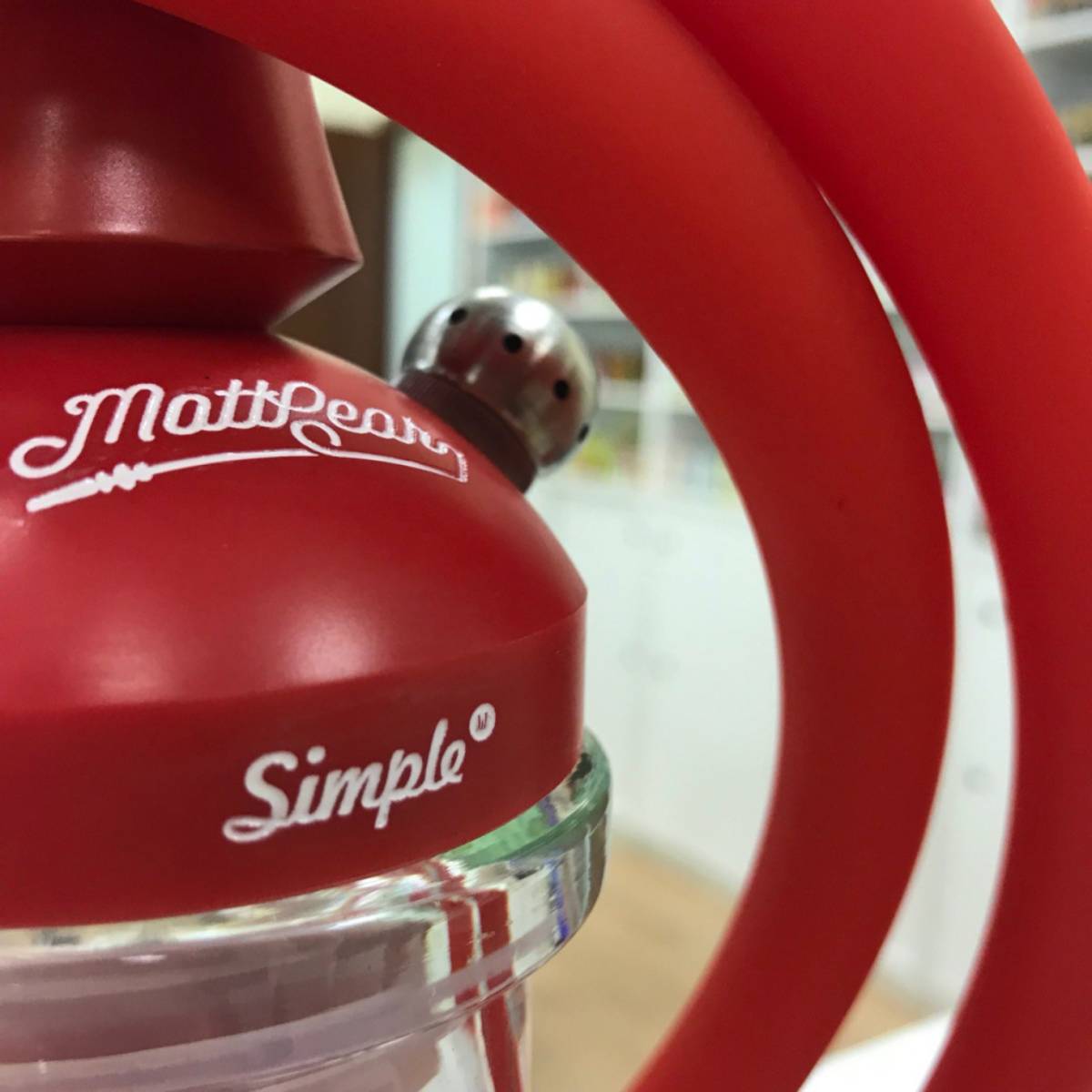 For a very long time users have been waiting for something radically new from MattPear. Model Mimi M became a breath of fresh air and pleasantly surprised all fans of the brand. This hookah was the first model of the brand, made entirely on its own equipment. Despite the fact that externally it resembles a smaller version of MattPear Classic M, it has a lot of differences. This is the first model that does not imply the regulation of the draft, due to the lack of the diffuser. All the draw is made solely by the immersion tube. Despite this, the hookah has a classic for the models of this brand of draft, which can only be changed by the water level. The shaft height is 39.5 cm, the inner diameter of the tube is 10 mm, and the weight is only about 2 kg.

The kit includes: saucer with grooves, flask, shaft, shaft cone, the base with a magnetic connection, purge valve, connector for the hose, mouthpiece, "obedient" hose, spring for the hose, seals for the flask and bowl, as well as branded case MattPear.

The MattPear Mini was not even on the market for a while after its release. This is due to the fact that the company did not want to deliver this hookah with incomprehensible flasks of dubious manufacture. Given the custom size, they had to be custom made anyway. By the time of the release, this model came with flasks made of Bohemian glass, produced specifically for MattPear in the Czech Republic.

The design is classic in two variations. Ball - with a ball in the middle and Slim - with a simple elongated shaft.

To summarize, we can say that MattPear hookahs can be a great solution for both home and for the institution. Among the disadvantages are the magnetic connection of the connectors, which is not to everyone's liking. Some users state that their magnets rot quickly, and their replacement, though simple, causes discomfort.

We should also note the fact that the bowl seals on MattPear models are not universal and may not fit any particular bowl model. When choosing a set with polyacetal overlays, some users report an unpleasant odor from the overlays that appears over time.

Are MattPear hookahs up to date? Definitely yes. Today they certainly do not surprise anyone with their design and functional solutions with magnets. But after 6 years on the market, these waterpipes managed to recommend themselves well. Many people notice that even after using MattPear Classic model for 4 years the hookah is still almost in perfect condition. And even though MattPear Ready M looks like an attempt to get on the receding hookah stick carriage, it is still an excellent example of the price/quality ratio, especially considering the 5 year manufacturer's warranty on all devices.

To buy MattPear models of hookahs, as well as additional accessories for them - contact the HookahMarket store. In addition to the presented brand in the range there are many other manufacturers and brands of hookah accessories. Our specialists will advise you on all your questions and help you in choosing the necessary hookah equipment.